Home is where the art is: Lincoln’s newest art project 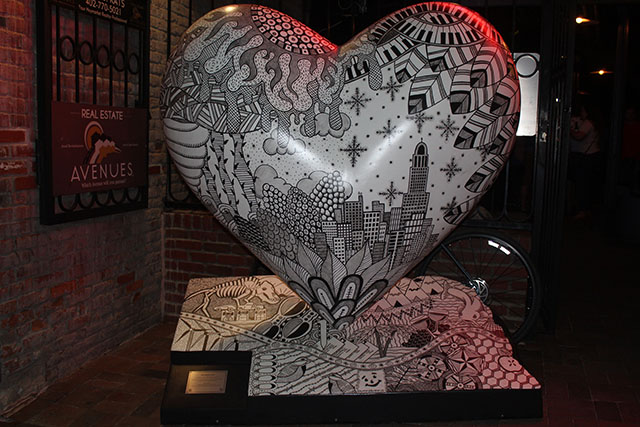 Roaming around downtown Lincoln, you may have taken slight notice of the many heart sculptures displayed. These hearts are the product of a public art project called “Nebraska by Heart,” which celebrates Nebraska’s 150th anniversary.

Based on the article “’Nebraska by Heart’ public art project launched” by JoAnne Young, it was expected that 93 heart sculptures would be on show. Each piece would be made to honor each county in Nebraska as a part of the sesquicentennial celebration.

Liz Shea-McCoy, the director of the project, had also directed other public art projects such as “Tour de Lincoln” and “Illuminating Lincoln: Lighthouse.” Both projects have been auctioned to raise money for certain charities and the artist who helped to create the artwork. “Nebraska by Heart” will later be auctioned to raise money for the artists, the Sadie Dog Fund, and Lead Up (formerly known as Boys Hope Girls Hope).

The Sadie Dog Fund makes it their mission to provide financial assistance to owners who don’t have the money to nurse their pets back to health or take care of the pet’s illness. They give this type of aid to prevent animals from living a life of pain or from having to be given up and placed in an overcrowded shelter. The funds granted to this organization help a lot because they rely on volunteers, donations and grants to keep running.

Lead Up is another non-profit organization benefitting from this public art project. Lead Up provides help for academically capable students in-need. These children are often provided with further academic support and assistance in career preparation and college readiness. Their main goal is to help academically motivated children reach their full potential. Based off the Nebraska by Heart website, “Lead Up believes that education, community and career are key to transforming the lives of underrepresented students who become drivers of economic development and growth.”

According to the article “Hard to beat hearts project” on Lincoln Journal Star, “Nebraska by Heart” features 6-foot fiberglass hearts (and in some cases steel and bronze hearts) meant to symbolize the state as the “Heartland of America” and focuses on Nebraskans’ love of their state and the pride they feel in calling Nebraska home.” A majority of the sculpture bases are formed in the shape of Nebraska. Artists from across the state have contributed to this project by transforming the blank hearts, and their bases, into pieces of their own art.

These sculptures are said to appear in various areas in Lincoln such as Downtown, the Haymarket Area, and UNL’s East and City Campuses.