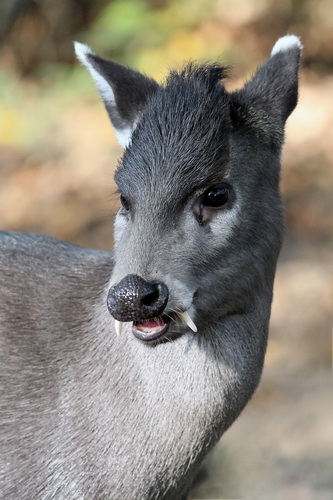 Many people have pets at home that they love to see everyday. Other people love to go to the zoo and look at the more exotic animals. Deep in the ocean there are creatures still unknown. Everyday fossils are being discovered about species that once roamed the earth. However, there are some animals that have been discovered, the general public does not yet know of. These weird creatures roam the earth everyday and some people don’t even know they exist.

Native of Madagascar, these endangered animals may not seem to be primates, but they are even related to humans. These small creatures have large, bushy tails and big eyes. The aye-aye also have long fingers with pointed claws. The claws are on all fingers except for their opposable big toes. These allow them to dangle from branches. These nocturnal creatures thrive in the rainforest and spend the day in ball-like nests composed of branches and leaves. Although they are native to Madagascar, the people there believe they are an omen of bad luck. This, along with their homes being cut down, have put the aye-aye in danger because they are killed on spot. Today since they are on the endangered list, they are protected by law.

Vampires in China? The tufted deer is named after the tuft of black or brown hair on their forehead. The animal itself is a dark color with white highlights. Another distinct characteristic of this animal is their large, pointed canines that come out of their mouth like fangs. The tufted deer is rarely seen and prefers to come out at dawn and dusk. They tend to be solitary animals, rarely traveling in pairs. These animals may seem cute, but with their fangs and aggressive behavior they are creatures not to be messed with.

Although the name dumbo octopus refers to an entire genus of umbrella octopus, this animal is called this for its Dumbo the elephant-like fins. There are at least 15 species of dumbo octopus swimming in the deep. In fact, they live at least 13,100 feet below the ocean. This makes them the deepest living octopus known. Since living in these cold and dark depths can be hard, the dumbo octopus have adapted to live in these harsh environments. It is said that the females always carry eggs, even at different stages of life, and can hold sperm for long periods of time. This allows them to be able to find a mate and successfully produce offspring to keep this unique, rare species alive.

Many say it is a ball of slime rather than an actual animal. It is even said to be the world’s ugliest animal. These animals also live in the deepest depths of the ocean. However, its ugly appearance actually helps the animal survive at these depths. Their body helps them float above the seafloor rather than swimming around. This prevents them from exerting a lot of unnecessary energy. They live in the depths of the ocean near Australia so they are rare and people hardly ever see them.

The axolotl is a type of salamander and is closely related to the tiger salamander. It is also known as the Mexican salamander or Mexican walking fish. They originate from the lakes near Mexico City. The axolotl are weird in the sense of being a salamander because they reach adulthood without undergoing metamorphosis. Due to this, they do not develop lungs and go onto land. The axolotl was once near extinction due to the growing urbanization and pollution near Mexico City. They are now on the endangered list and many people keep them as pets or try to breed them to keep the species thriving.

The long-eared jerboa looks like a mouse with long ears, a long fluffy tail and long hind legs that can jump to great height. The ears on this animal, which give it its name, are about three times the size of its head. They differ from other jerboas, so not a lot is know about this species. Biologists do know that the animal lives in China and Mongolia. However, it is believe the number of long-eared jerboas is declining due to humans taking over their habitats. Most jerboas are primarily herbivores, the long-eared jerboas, on the other hand, scientist believe their main diet consists of insects. Just another mystery about these tiny mammals.

The Japanese spider crab, or the Macrocheira kaempferi, is the largest known living arthropod. The adults can reach up to lengths of four meters long from one tip of the cheliped to the other. The crabs are typically found near the Pacific side of Japan. They tend to live on the sandy bottom of the water usually around 150-300 meters deep. For food they scavenge on the seafloor looking for dead matter. The Japanese spider crab tend to look for food alone and spend much of their time alone, even when in captivity. However, a lot is still not know about the Japanese spider crab.

Many people think naked mole rats are gross. These creatures are hairless, wrinkly and have a cylinder-like body. These rodents live in communities and are native to East Africa. They are naked due to the fact that days in Africa get extremely hot even though they live underground. At night, if they get cold, they lay in a pile to warm each other. The communities can consist of 20 to 300 rodents and their underground tunnels can reach the length of six football fields with rooms extending off at different points throughout the tunnels. Although they seem weird at first, Rufus from Kim Possible seemed to be a friendly companion to the show’s characters.

The Kiwa hirsuta is also known as the “Yeti crab”. The Kiwa hirsuta is a species of squat lobster. This creature is unique enough to be located in its own family and genus. They are known as the “Yeti crab” because their appendages have a hairy appearance to them. The species was first found in 2005 near Easter Island by marine biologists. These species are blind and have a strange appearance. Since the species was discovered not long ago, there is research still being conducted about this species.

This animal is named after its hairless, star shaped nose which has a weird appearance at first. The star has 11 appendages per side that vary in length. Their 22 appendages are covered with tiny, sensitive projections known as Eimer’s organs. This makes the star-nosed mole one of the most sensitive mammals in the world. The animal is native to eastern North America in places with mainly soil. However, they venture to lakes and pond in search of food. The species only lives for 3 to 4 years in the wild. Nevertheless, they can have up to seven kids at a time. This is a unique species that most people wouldn’t even come near.